As far as the architectural style is concerned, the houses in Naxos Town itself (otherwise known as the Chora) do not bear the mark of the typical Cycladic home. There are, of course, certain common elements, such as the defensively planned layout of the town, with narrow maze like streets built on the slope of a hill which forms a natural acropolis at the town’s highest point. The dense proximity of the buildings, within the fortification, and the expansion of the settlement beyond the ramparts in later years again add to the defensive nature of the town.

Unlike the other islands of the Cycladic group, Naxos has produced written testimony related to the construction of a Kastro (castle) at the Chora and the creation of a settlement within it; there is clear evidence that the town was designed and built to a particular plan by an engineer who divided up the available land into the various plots. We know there was no such organization and attention to detail in the rest of the Cyclades where the norm was skilled local craftsmen taking on the role of the engineers by following their unfailing instinct for order. 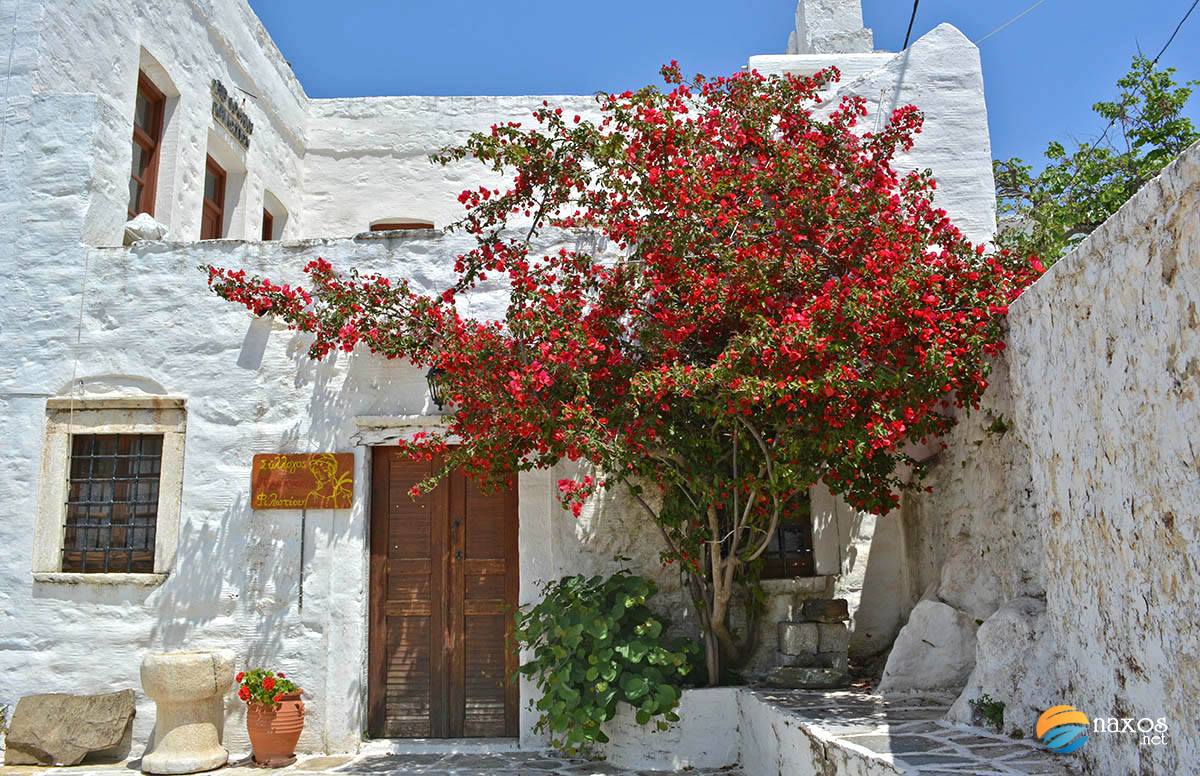 The fortified part of Naxos town is built at a height of roughly 30 meters a.s.l. Remains of ancient buildings in the area have led scholars to the conclusion that even in ancient times this part of the island must have been inhabited, and quite a lot of the material from the ruins was incorporated into the stonework of the existing Kastro.

Chora (Naxos Town) consists of a basic medieval nucleus enclosed within a strong walled fortification, pentagonal in shape, with five towers (one at each corner) and three gates, plus the settlements outside the walls where building was less organized and developed in a circular fashion around a notional center: the Kastro. The medieval town of Naxos was founded by the Venetian Marco Sanudo in 1207 A.D., when, together with his companions, he seized seventeen Aegean islands and declared himself Duke of Naxos.

Having built the Kastro to fortify the town, he proceeded to apportion the land around him to his noblemen and officers, who also built their own towers near the ducal tower. The wall and the settlement were therefore built at the same time; the wall of the Kastro is made up of the houses erected along its perimeter. The center of the fortified town is the central square, flanked by the Catholic church and the central tower - the highest building and the most strongly fortified point - of which only a small, low section survives today.

Two of the original three gates are still standing, one on central Pradouna Square and the other on the northwestern side, which has an old wooden door. The only circular tower to have survived is that built by the Glezos family beside the wooden door. Symbols of western power and influence expressed through religion are, typically, the Catholic Church, the Catholic monastery of Agios Antonios, the Capuchin monastery and the Ursuline convert which can still be seen today. In addition, under Venetian rule a school of Commerce operated within the Kastro, along with the Administrative Offices. The organized, fortified nucleus thus served as a place of residence, as well as an administrative, educational and religious center for the Venetian conquerors. It was a town which throbbed with medieval life.

The islanders who came under the Duke's sway settled outside the Kastro and gradually the districts of Burgos and Agora grew around it. More recent districts, such as Grotta and Fountana, were formed later by Jews who settled on the island; likewise Neo Chorio was established by Cretans and refugees from Asia Minor. As in the Kastro, the houses in these areas spread in radial fashion, the one joining on to the next one to form a wall into which gateways were established; the ones at Burgos and Agora still survive today.

Naxos houses (as seen in the wide selection of architectural photos) can be divided into three categories:

a) The mansions in the Chora, most of which were built within the Kastro, although there are quite a number outside its walls which belonged to rich traders.

b) Working class dwellings in the Chora itself and in the island's villages.

c) The towers, which form clusters of dwellings in the countryside outside the Chora.