As far as the origin and use of the Towers were concerned, there were four distinct types: 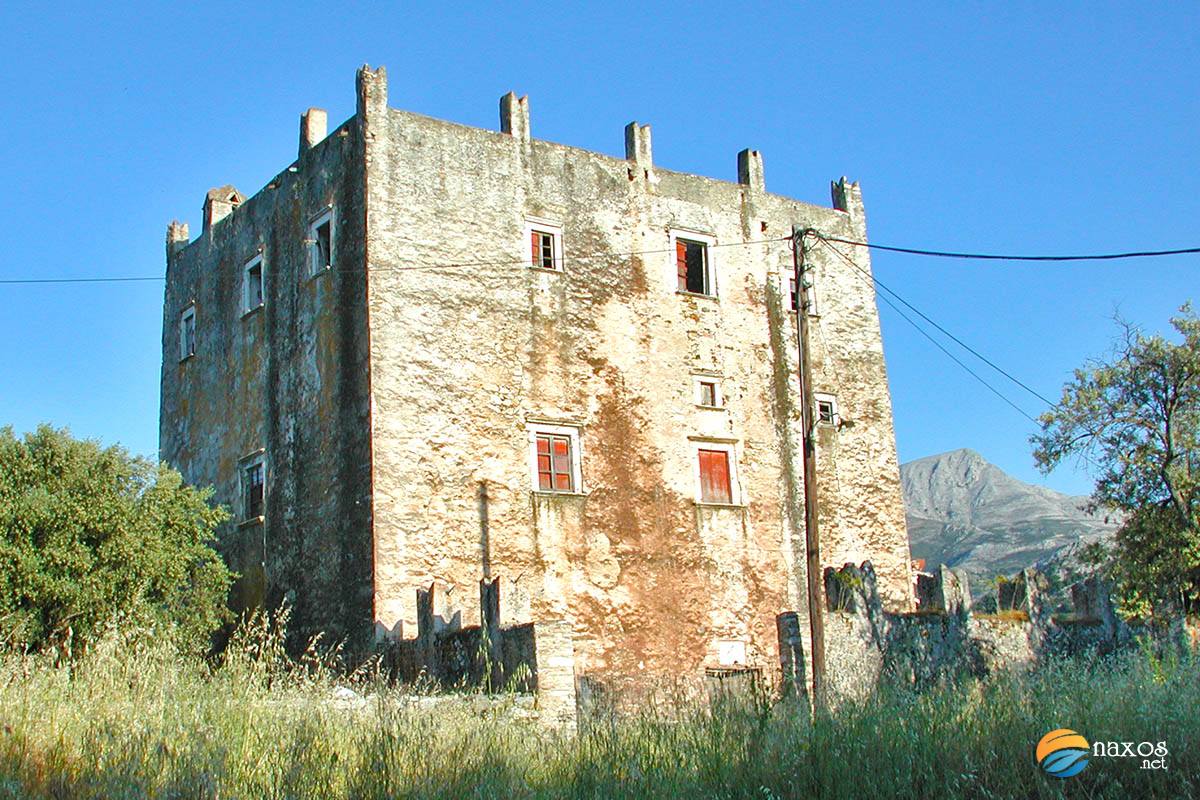 The first three kinds of tower were built for purposes of defense, and were erected at naturally fortified sites. The towers which were used by the Venetians as their country houses, on the other hand, were simply put up at attractive locations and had no aim of providing defense for their owners.

These buildings are quite unique in that they combined elements of Western and Cycladic architectural style. Surrounded by strong walls which enclosed a large courtyard, the main building was used for habitation and the auxiliary building as store-rooms for foods and agricultural produce, as stables, wine-presses, etc. From outside, the complex presents a formidable yet magnificent appearance; built out of local stone, with no external plastering and bare as they are of the usual coat of whitewash, these towers blend in totally with their environment. Openings in the towers' front elevation were small and few; this accorded with the Cycladic style but was also because the buildings were used for purposes of defense. Doors and windows were topped by sculpted marble lintels and flanked by jambs depicting figures carved in relief, similar to those of the mansion-houses within the Kastro, and they represent the sole decorative feature in an otherwise grim and forbidding facade.

Some elements From Western architecture which emphasize the formal size and important status of the towers are the battlements formed by the parapet around the roof , the loopholes and the holes above the main entrance through which boiling oil was poured in defense of tower. Another less common feature copied from Western architecture was the wooden drawbridge which was raised and lowered with chains to prevent the enemy from gaining access to tower.

Few of the houses had courtyards. Mostly there was a tiny yard, sometimes enclosed by a low wall; where there was none, the yard became a continuation of the street, creating a feeling of intimacy and human contact in which the business of everyday life was transferred from the privacy of the house to the yard and thence to the road itself. As a result, the streets took on an additional function over and above their usual one: they became an extension of people's living space. These narrow paved or cobbled roads, often very twisty, were lined on each side by the front walls of the houses with their outside stair, wooden balconies and decorative marble supports, whitewashed parapets and characteristic covered verandahs with semi-circular or pointed arches.

There are few squares in the town, and those there are small. The local people mostly gather for a chat in the open spaces formed where two lanes join, or where a courtyard of a house meets the road.

The movement of beasts of burden through the narrow streets was always problematic. However, the ingenuity of local craftsmen came to the rescue with a simple yet practical solution to the difficulty: houses at streets corners had their corners rounded off so as not to jut out; this modification was then decorated with a variety of designs which enhanced the artistic appearance of the streets.

The predominant features of the Chora are economy of space, functionality, and an all-pervasive feeling of security and intimacy. The village consists of simple buildings, similar in appearance, which are ingenious in their simplicity, and of clusters of buildings that are equally unpretentious. Everything is designed to have a specific function.