The capital of Naxos (called Naxos Town or Chora) includes the island’s main port. Due to its position, it offers a variety of landscapes, which is quite unique for a Cycladic island town. Its proximity to the sea combined with the large number of tourist attractions and amenities make Naxos Town the most preferable place to be on the island.

As the ferry approaches the port, Portara immediately catches the traveler’s eye. Portara is actually the Greek word for “big door”. It is an unfinished temple dedicated to Apollo. This is where, according to Greek mythology, Dionysus met Ariadne. Portara was built on a small rocky peninsula called Palatia. Portara and Palatia are a favourite afternoon walk for all those who love the view of an unforgettable sunset. 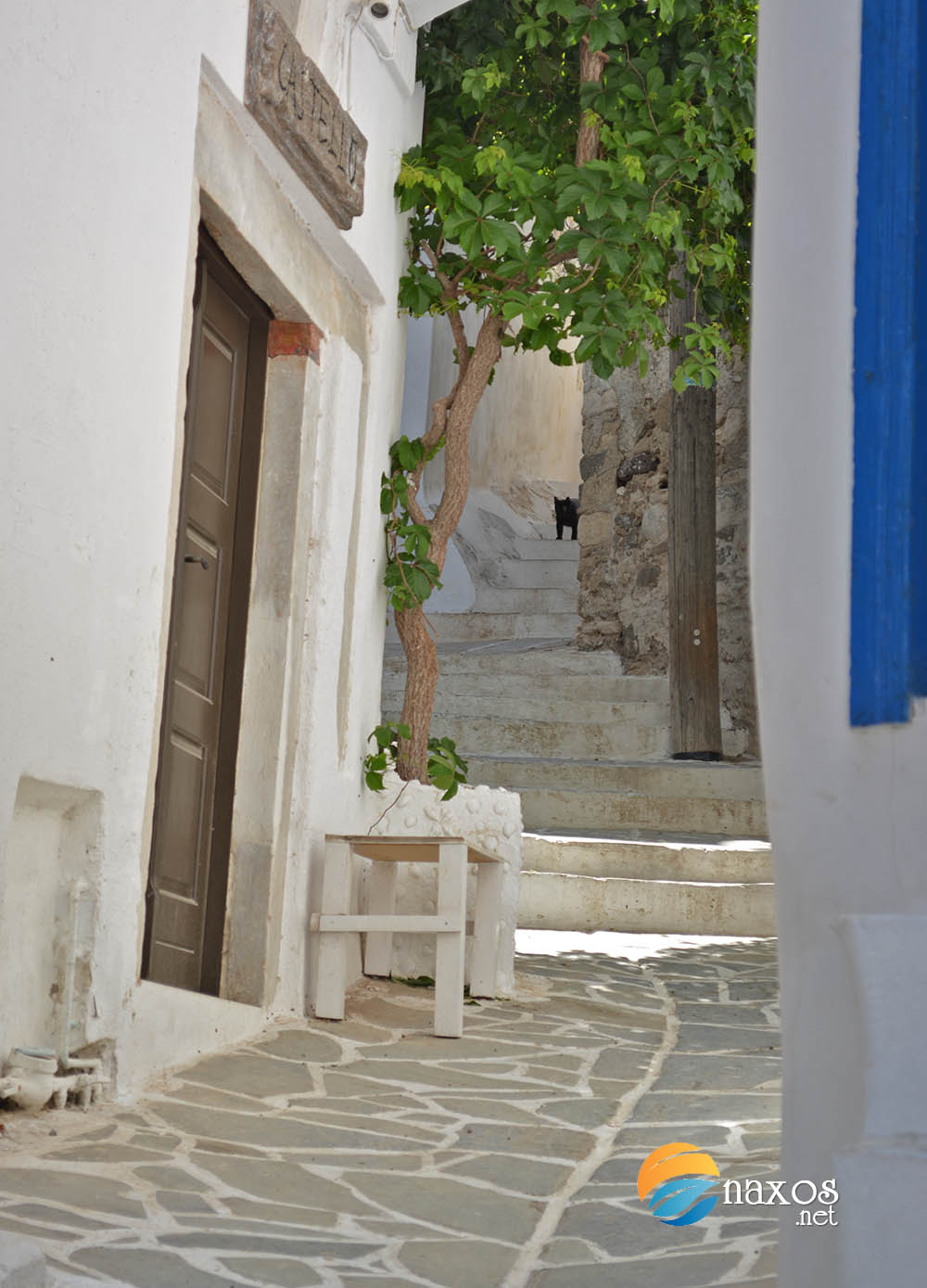 Naxos has a rich historical background. The visitor has the opportunity to see many historical monuments. In the villages of Naxos and in various rural areas we have the Kouros of Apollonas, the Kouros of Melanes, Demetra’s Temple and other important historical sites. But it is in the capital of Naxos that the visitor will find more, like Portara, Yria (the Sanctuary of Dionysus), the Archeological Museum of Naxos, the Castle and the Old Market. Naxos island has been inhabited since antiquity. According to legends, Dionysus met Ariadne, Thiseas’s abandoned wife in Naxos and married her. It is said that the first Dionysus festival in antiquity was held here. Back in the ancient times, Naxos was famous for its marble, had a growing economy and an important civilization. Marko Sanoudo conquered the island in the 11th century and created the Duchy of Naxos. He built a castle on the hill overlooking Naxos town.

With a population of approximately 2000 people, Naxos Town is quite busy all year round. However, it becomes even more crowded towards the end of spring (starting as early as mid May) and throughout the summer (right to the end of September). Unlike other areas of the island, on Naxos Town, many bars, café, tavernas and restaurants are open all year round.

Closest and nicest beach on Naxos Town is the beach of Saint George (Agios Georgios in Greek). It is usually a crowded beach with lovely tavernas literally on the sand and many bar-café to enjoy breakfast or a late evening drink. You will find umbrellas and sunbeds in the largest part of the beach as well as a famous sports club towards its end, where you can enjoy your favorite sports or take surfing lessons. The beach iof Saint George is perhaps the most popular on the island of Naxos, ideal for people who are not strong swimmers and for families with young children. 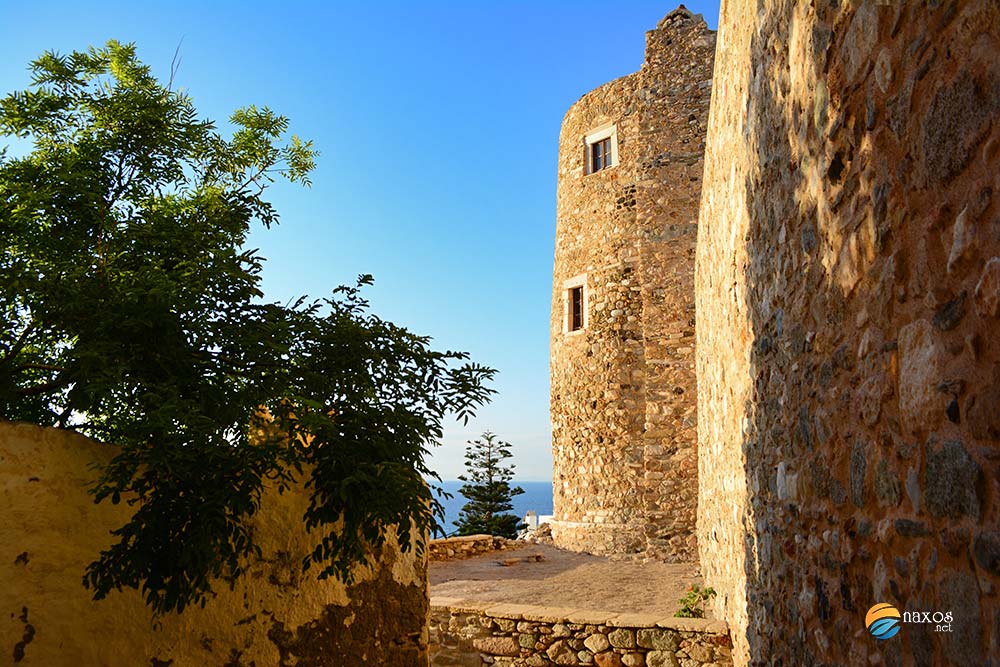 There are two major attractions that make the capital of Naxos island, perhaps the most interesting among all other capitals in the Cyclades and these are the Portara Temple and the Castle also known as Crispi or Glezos tower.

There are very few hotels in the castle area, some of which have preserved the traditional architecture of the area. The castle gathers a lot of people during summer season, as many festivals and exhibitions take place there. Well known bands and artists from all over the world come to play in this mystique environment while painters and sculptors choose to exhibit their creations within its walls. No cars are allowed there, so the environment is very relaxing and quiet. There are many shops within the castle like jewllery shops, local product shops as well as traditional tavernas and small bar-café. The Archaeological Museum of Naxos is located there. You do not want to miss this; the exhibits of ancient Cycladic art will amaze you.

Naxos Town stretches along the port's promenade. It is this very area that attracts most people during the tourist season. One would say that, in essence, this is the centre of the capital. No matter what time of the day, no matter where you look, the view is stunning. People enjoy it by having a coffe, a dring or by choosing their favourite meal of the day, but it is there for all to enjoy for free.

The local bus terminal and the taxi terminal are conviniently located at the end of the port's pier. Enjoy Naxos Town, even if only for a walk; you will not regret it. 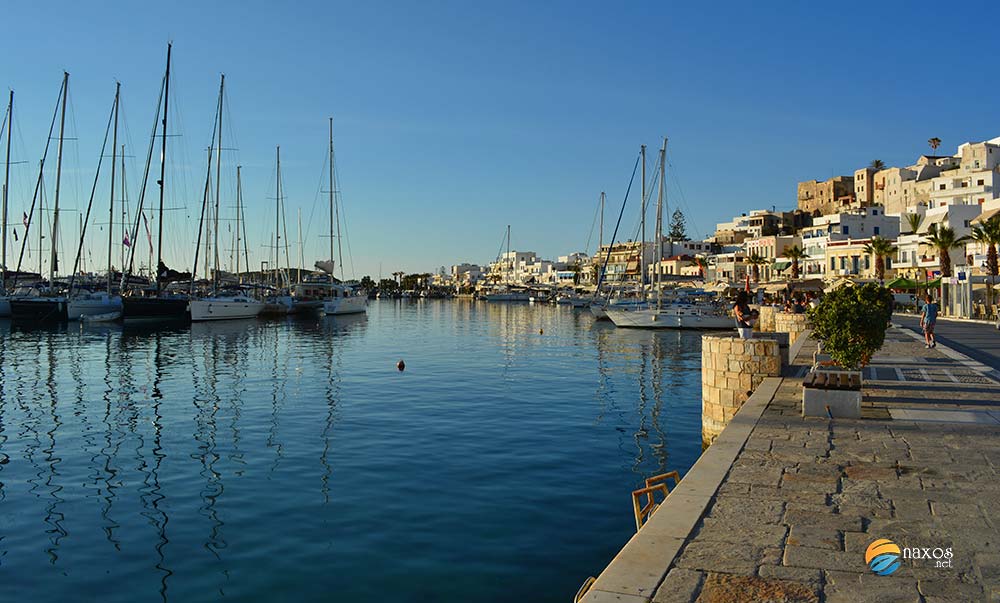