Naxos belongs to the Cyclades group of islands, located in the heart of the Aegean Sea. The group includes some 30 islands and many uninhabited islets and it is considered among the hottest summer destinations in the world.

Naxos is the biggest of all Cyclades islands, occupying approximately 430,000 km2, with a mountainous interior and a coastline of sandy and rocky beaches. In fact, Mount Zas is the highest peak in all Cyclades, reaching 1003m in height. Inland Naxos consists of a series of mountains and hills with fertile valleys in between that have supported the locals for millennia. 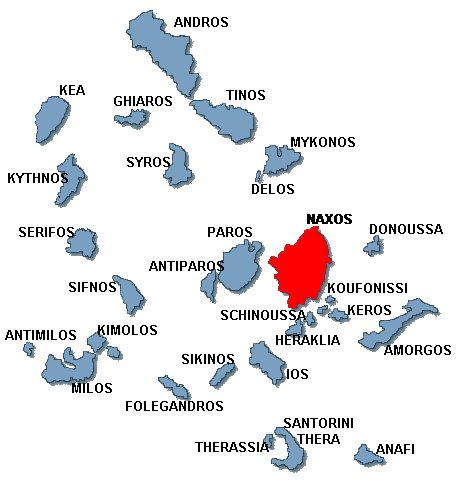 It is its position and its ground morphology that has shaped the economy and, therefore, the historic evolution of Naxos. Being able to produce large amounts of vegetables, olive oil and meat, Naxos soon became rich, transferring its abundant produce to its neighbours. Flourishing for centuries enabled the locals to develop a strong economy. The island became a protagonist in the historical map of the entire Aegean Sea. According to Herodotus, during 500 B.C. Naxos was the richest of all Greek islands.

During the middle ages, the continuous and relentless attacks from pirates led the locals to inhabit more of the island’s mountainous interior to protect themselves and their livelihood, building at the same time strong castles and towers at strategic locations overlooking the entire island and the surrounding Aegean Sea. This resulted in the development of a large number of inland villages, which continued to support the island’s agricultural economy.

Naxos of today has shown a remarkable growth in its tourist economy, attracting tourists from all over the world but mostly from other European countries. Its countless beaches offer a great variety of options to visitors. Its traditional villages are a magnet to all tourists for their beauty, their unique architecture and their amazing sceneries.

Next will follow a map with the most famous holiday spots of Naxos island.

There are so many tourist attractions on Naxos. When it comes to Naxos beaches, Saint George beach, Agios Prokopios beach, Agia Anna beach and Plaka beach hold the sceptre. As for the villages, Apeiranthos, Filoti, Halki and Moutsouna are those preferred the most by tourists. Imposing archaeological sites on the island of Naxos are Portara (the gate of Apollo’s temple), the Temple of Demeter (at Sagri), the Temple of Yria and the Kouros of Apollon village.

Every single village and nearly every beach on Naxos car be accessed by car or motorbike via a well maintained asphalt road network. Like in most of the Greek islands, on Naxos there are quite a few beaches and small coves that are accessible by boat only.

As expected due to the island’s size and mountainous morphology, some areas are easier to access than others, having to cross steep mountain slopes with amazing panoramic views of the island’s rural inland and its coastline, stopping at several traditional villages on the way. It is all worth it. Holidays on Naxos is not all about the beaches, as most tourists soon realize. This is why mountainous activities on Naxos, such as hiking and mountain biking, are so popular.

It all starts from Naxos Town, where 3 main roads lead to the north, the inland and the south of the island. From there, these roads split to several directions, connecting the beaches and villages. Due to the island’s terrain, in order to visit as many villages as possible, careful planning is required as it might be necessary to travel great distances to get from one village to another, if they are not along the same route.

When it comes to beach exploration, things are much easier. First of all, one has to select in which part of the island to swim. Also. an early morning start will allow you to see quite a few of these magnificent Naxos beaches within the same day. This applies to both the south-west and the north-west beaches.

So, going towards the north, the beaches Ammitis and Abram can be enjoyed within only a few hours. Apollonas beach can also be reached as it is along the same route. Following the northern beaches route you will also come across nice taverns, most of which offer dishes made with the owner’s own produce and at quite low rates.

Following the route going south, the most touristic area on Naxos, you will mostly drive along the coast, admiring the view and the sunbathing tourists, realising why Naxos is so adored. Right after Naxos Town you will reach Agios Prokopios beach, then Agia Anna and Plaka beach right after that. From Agios Prokopios, you may leave your vehicle behind and walk on the sand all the way down to Plaka beach and dive into the Aegean Sea to cool down. While doing that, you will come across many cafe where you can rest a bit or grab a bite at one of the many beachfront tavernas in the area. Continuing further south, Orkos beach, Mikri Vigla, Kastraki and Alyko are accessible by car or local transportation, via either the earth road close to the coast or the villages Galanado and Tripodes.

When it comes to the eastern island beaches, things get a bit more complicated. Distances are greater and when starting from Naxos Town, a whole day plan must be made. If well organised, it will give you the opportunity to enjoy beautiful and quaint shores, far from crowds and noise.