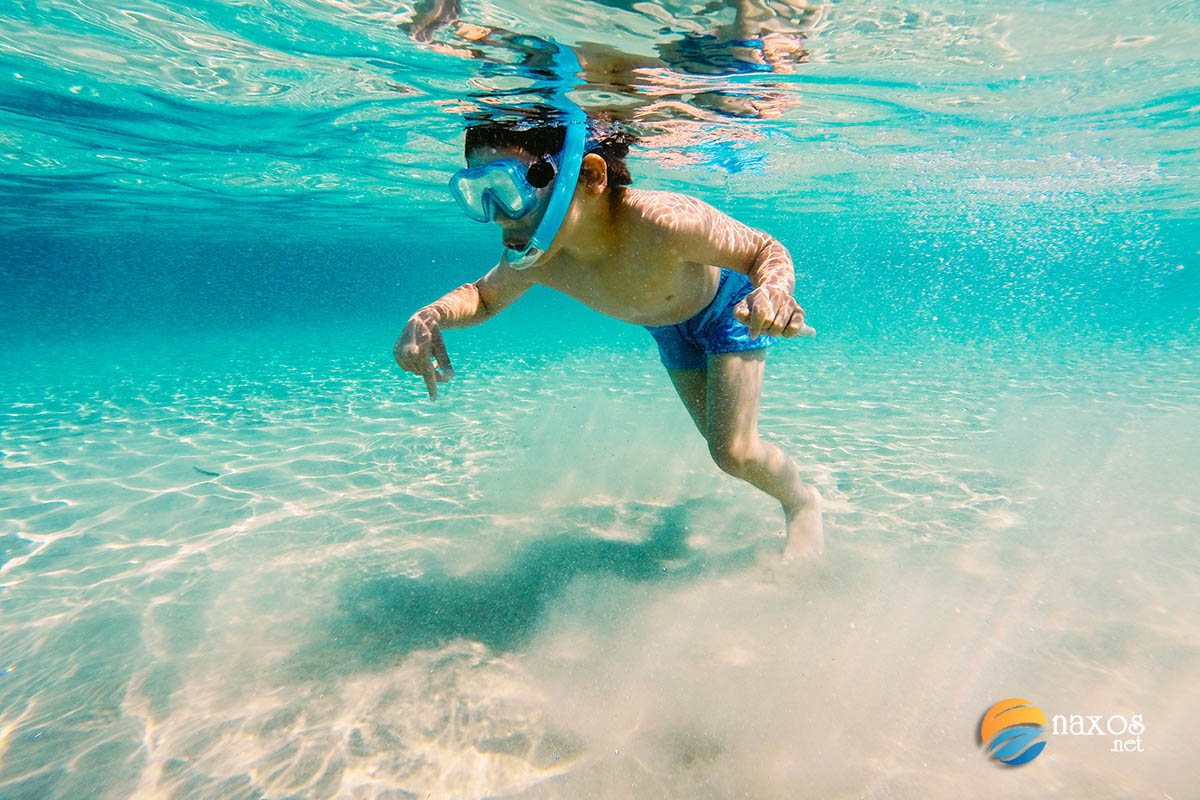 I thought Greek Islands meant partying until my sister’s boyfriend mentioned that his brother and his family had spent summer in Greece on the island of Naxos. Naturally the next question was “wasn’t it noisy?” The answer was pretty surprising. It turns out Bret, his wife Linda and their two kids had a wonderful family time there. I called Linda for more information since I had two kids of my own. End result, we planned a Naxos holiday for both our families!

Our family holiday experience on Naxos was fan-tastic! Naxos has some really good beaches for children, shallow and warm with life-guard and several places to eat on the beach. And, although Gary, my hubby insisted on seeing some other beaches as well, we eventually stuck at Saint George beach in the capital. Apparently, Naxos has over 30 to choose from, but we couldn’t visit them all! With four kids and a bunch of stuff to carry, we quickly found out that some beaches didn’t have life-guards and the winds could make the sea pretty rough for the little ones. I suppose if it had just been the two of us without the kids we would probably have chosen them. Some were really secluded and very few people visit them. The kind of place for adults before they marry, or after…?

Accommodation was very decent for the cash we paid and the food was great. Pretty simple fare for the kids, they are always a little difficult, and new tastes for us. One thing that really made an impression on us was the taste of the food. Compared to the grocery store variety at home, this was heavenly! We’ve been told that Naxos produces most of its food on the island, usually on smaller family plots, so you know you’re getting the good stuff!

Apart from swimming, lazing in the sun (you need some good sun-block here, 30+, the sun can be devastating) and visiting the different sights, there are windsurfing and kite-surfing lessons to be had. Gary tried the windsurfing and acquired a taste for it although I have no idea where he is going to be practicing it here at home.

Hiking is pretty big but not for the kids although Linda and Bret had tried it with their elder last time, they didn’t have Charlie then. There are trails that link different archaeological sites and villages so it makes the days an educational experience as well. Biking is also quite popular, although this is a big island.

The only way to get around with family is to hire a motorcar. Between our two families we managed to cram everything in, just in case we hit a beach (the cars were pretty small) and get around the island quite happily.

The old town of Naxos is basically everything in the castle walls which is pretty neat. It’s a pretty fun place for kids and there are plenty of stores to shop at for a little more eclectic tastes, Brett and Gary bought us girls some handmade jewelry we had pointed out earlier in the day.

Morning coffee and breakfast at the harbor front of Naxos town is a lovely affair, it’s a pretty scene with lots of boats and some really expensive yachts to look at, Bret seemed to enjoy that a lot.

All in all, I’d say that Naxos is the perfect family holiday island, there’s plenty to do, plenty to see, it’s safe for kids, the food is really good value for money, the people are friendly and Greeks love kids, can’t go anywhere without them getting attention.

I know we’re going back soon.