Naxos is the largest and most important of the Cycladic islands. In many respects it is an island with a rich natural environment suitable for the development of farming and stock-raising. Both activities have been practiced for millennia. It is also an island with natural harbors suitable for commercial vessels, all these circumstances which have contributed greatly to the island’s strong continuous cultural presence from the end of the 4th millennium BC to the present day.

Naxos has a long drawn history stretching from the Paleolithic age to the Ottoman periods with the Mycenaean period and the Venetian in-between. Excavations on the island have brought to light important finds dating from antiquity to the later Roman-Byzantine years. These finds are distributed amongst the museums in Chora and other regions of Naxos. The finds housed in these museums are indisputable proof of the strong culture of the island, through the ages.

Naxos first flourished during Early Cycladic period (c.2700 - 2300 BC), during which, along with the small nearby islets, it gradually developed into one of the most important commercial and cultural centres of the period. Naxos did however lose its leading commercial and cultural position in the Aegean, during the later phases of the Bronze Age. This was because a variety of changes and upheavals took place in the Aegean, which resulted in new centres rising to prominence on the neighboring smaller islands namely, Milos, Paros and Thera - Santorini).

Excavations over the last forty years have brought a large number of archaeological sites (Aplomata, Grotta, Iria, Melanes, Panormos, Pithos in Chora, Sagri, Tsikalario in central Naxos and Korphi t'Aroniou in eastern Naxos). All finds that are now housed in the Naxos Archaeological Museum.

This museum is of particular interest to the visitor in Naxos town (Chora - Hora). It was established in 1972 and it is located at the central square leading to the Castle (Greek - Kastro) at the top of the rise and is accessed by one of the narrow ascending alleys. The museum is housed in an elegant 17th Century Venetian mansion and has a total of five storeys. This is a building which constitutes a representative sample of the island’s architectural style during the Venetian rule. The building used to be the old School of Commerce (Greek - Eboriki Sholi), an Academy the Jesuits established in 1700. The well known author Nikos Kazantzakis was a student for a time. 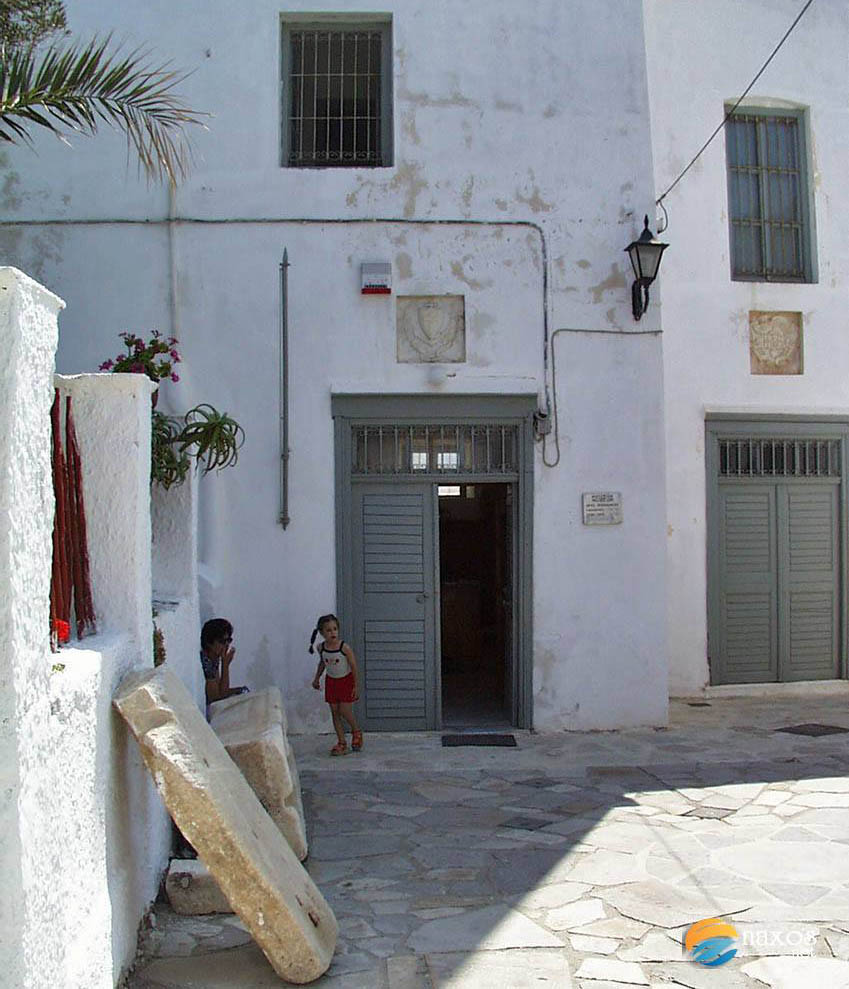 The Archeological Museum of Naxos Town houses mainly works of art and objects of everyday use, dating from the Late Neolithic period to the Early Christian times (5300 BC - 5th century AD). These finds came to light in the excavations which have been continuing on the island since the Second World War. The museum is also very close to the excavated sites which brought these finds to light and the sites are open to visitors.

Two very important collections are the Cycladic and the Mycenaean collections. Among the exhibits prominence is given to what is known as the “Cycladic Collection”, which include marble vessels scored with spiral patterns, earthenware pots with finely crafted decoration and designs, hand-tools made of wood, and others made of stone or copper. There are representations engraved on marble tablets, funerary gifts and many Cycladic statuettes which are striking for their simplicity of expression which today would fit in any modern art collection.

The Archaic (7th - 6th c. BC), Classical (5th - 4th c. BC) and Hellenistic (3rd - 1st c. BC) periods are represented by characteristic examples of pottery and terracotta figurines. The Roman period (1st c. BC to 2nd c. AD) has not only pottery, but also a large collection of glass vases of great interest. Archaic sculpture is represented by a few but very important works as well.

Similar items to those seen in the Archaeological Museum of Naxos can also be seen at the Museum of Apeiranthos, the mountain village. There are exceptional findings of the Cycladic Civilization (3000-1200 BC) and plaques sculpted with iconograms of early examples Greek writing. Despite its small size, keep in mind this is a mountain village, Apiranthos also has a Folklore Museum that houses household items of everyday use and a large number of handmade woven textiles and tools. In addition to this is also has a small but impressive Geological Museum offering a great collection of rare ores and other interesting geological specimens. The exhibits include a rich collection of minerals and fossils all carefully arranged and displayed in historical and geological sections and gem groups.

In old Naxos town there is also a Venetian Museum Located beside the north gate of the castle which is housed in the mansions of the Della Rocca (de la Roche) and Barozzi families which are historical landmarks. The museum also hosts musical events in the courtyard in the evenings from spring till fall.

The small village of Eggares has the Olive Press Museum which dates from 1884 and the exhibit displays all the stages of olive oil production and products derived from the olive.