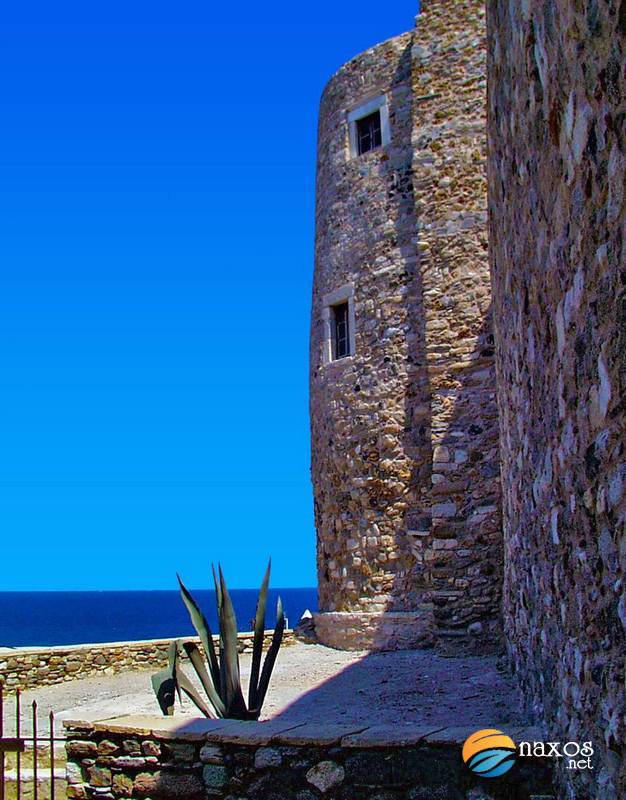 It is located in the Castle of Chora, a few metres after entering it through the “Trani Porta” (Greek - Great door), on your left. It is the only one preserved of the estimated 12 towers of the medieval castle of Naxos and what distinguishes it is its cylindrical shape. In actual fact, it was the private mansion of the illegitimate son of Duke Guillermo II Crispo (r1453-63), Jacobo, which is why it is also known as the Crispi Tower. Jacobo did not have hereditary rights to the dynasty but briefly served as governor in 1494.

Above the main entrance is the coat of arms of Joseph Barozzi (crown, feather, sword and medals) while the coat of arms of Crispi family (3 rhombuses, decorated with vine leaves) is above the interior door. Initially the tower belonged to Crispi family, then to the Great Interpreter of Barozzi Sublime Porte and finally it passed to Glezos family. These days, the tower serves as a Byzantine Museum, as had been specified by the monument’s last private owners, the Glezos family, when they donated the tower to the state. Due to its former ownership, the tower is also known as the Glezos Tower, or Aperathitissa – derived from Apiranthos, the donor family’s hometown.

Today a somewhat atmospheric museum is housed in the handsome old tower house of the 13th century. The owners who are direct decedents of the original Italian aristocrat owners continue to inhabit the building for a few months each winter.

Visitors are allowed to wander through the exhibits on a tour to see what people of the Venetian period wore, how the table was laid and how they furnished their rooms throughout the centuries. It is well worth taking the guided tour, as the guides are very knowledgeable. The museum is within the Kastro ramparts (by the northwest gate). Periodically there are various art exhibitions in the vaults. Evening concerts and other events are staged in the grounds of the museum.

The inner part of the tower is really impressive as is the view from the balcony that faces the sea whose purpose was to allow the supervision of the whole Naxos town, (Chora).

The lintol at the tower’s entrance is adorned with rather unusual heraldry that combines both Ottoman and Russian elements. These elements refer to the recognition of services offered to the two great powers in the late 19th century by one of the tower’s lords, Iossif Barozzi, an official in the service of Russia.