Houses for the people

The simplest form of island home consisted of one room, a rectangular area in which each corner served one of the household's basic needs. Larger units were gradually created by joining two or more of these single-roomed homes together, by dividing up one large room into several areas or by adding another room above the original dwelling. These extended units featured additional characteristics, such as an archway or "vault" which linked and at the same time visually separated two areas of the house that were used for quite different functions, and an internal wooden staircase connecting the lower and upper floors through a trap-door. The two-storey type of house was very common in the Chora as it served the needs of the householder better and enabled him to economize on valuable building space.

The lower floor contained the kitchen in which there was a fireplace (this room was also used as a dining-room), a store-room and an area which housed the family's washing and toilet facilities. It was rare to find the living-room, in which the family gathered for most of the day, on this lower floor. These rooms were generally one or two steps lower than the street level. 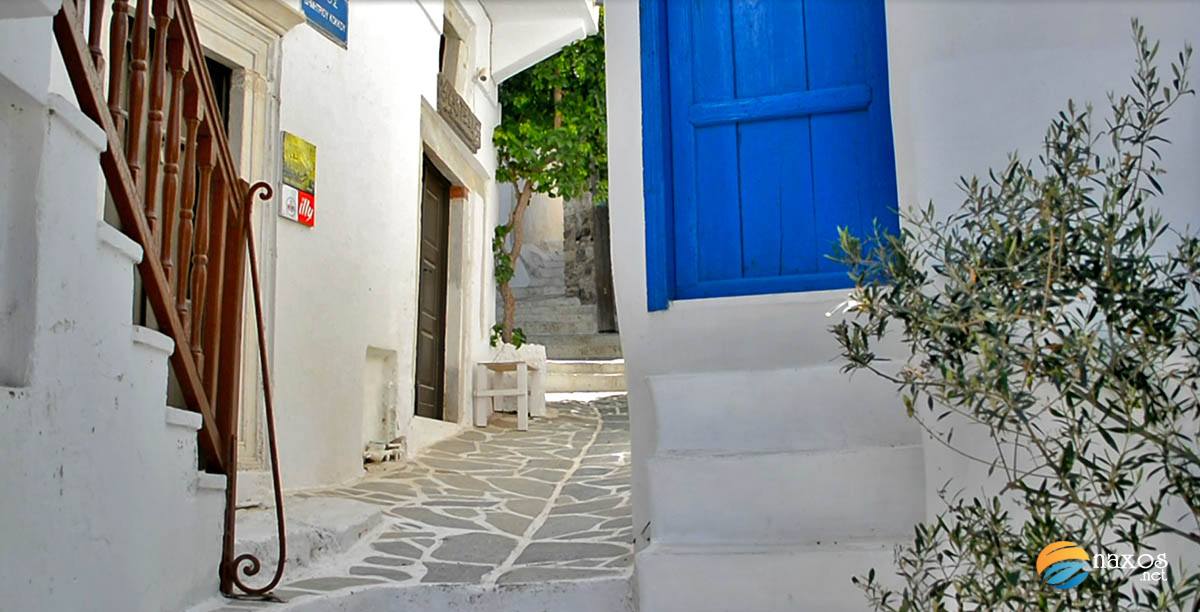 The upper storey consisted of a large reception room or sitting-room, formally furnished in a style which showed the bourgeois influence, and the bedrooms which led off the sitting-room. This type of house was very similar to the homes of the bourgeoisie but on a smaller scale. The upper floor was often extended over the next door house or over the road, to create a picturesque feature known as the "stegasto", a room that hung out over the road and was supported by an arch. This had the effect of joining the houses together like the links of a chain to create a unified whole.

A characteristic of the Naxos houses are the stairs, which are made of stone and had no balustrade or handrail. They were invariably steep, owing to the lack of space, and the area beneath them was usually covered in and housed washing and toilet facilities. The stairways led up to the “boudi”, a balcony on the upper storey from were access was gained to the rooms on this floor. There were several additional small wooden balconies on this floor, which were independent of each other.

The rooms in these houses were not necessarily all of the same height. Those areas of secondary importance usually had a lower ceiling, whereas the sitting-room ceiling was generally higher in order to give emphasis to the importance of the room. However, the difference in height could also be attributed to the fact that building took place over time or that further areas (of a different height) were added as the needs and composition of the family changed.

The houses had a flat roof which was surrounded by a low parapet. The roof sloped towards the centre and was used to collect rain water which drained away to the ground through a gutter hewn out of stone or hollowed out of the plaster to form a channel.

The roofs of the houses were covered with beams of the Greek juniper tree, more often than not reinforced with cross beams or hatch beams. Planks or wattles were laid over the top, and these were in turn covered with dried seaweed and two layers of earth. All these layers ensured that the roof would remain water-tight, and also provided insulation. The walls, which were thick and made of stone, were plastered and whitewashed.

There were, by and large, few openings in the outside walls, and these were narrow in order to offer protection from the strong winds; however, they were not so small as to deprive the house of the sun's warmth and light. Generally speaking, the doors and windows were made of wood, although the fanlights over the main entrance and basement windows were set with simple ironwork.

On the whole, the fireplace in the Naxos home tended to be used exclusively for cooking, which is why it was located in the kitchen. The other rooms, including the sitting-room, were heated with braziers. The fireplace was rectangular or bow- shaped, with a self above for cooking utensils and a recess beneath the storing of wood.

The picturesque chimneys, which took a number of shapes (round, square or rectangular) with a variety of styles of chimney-pot (broken earthen-ware jars, cones, etc.) jut out from the rooftops and complete the picture.