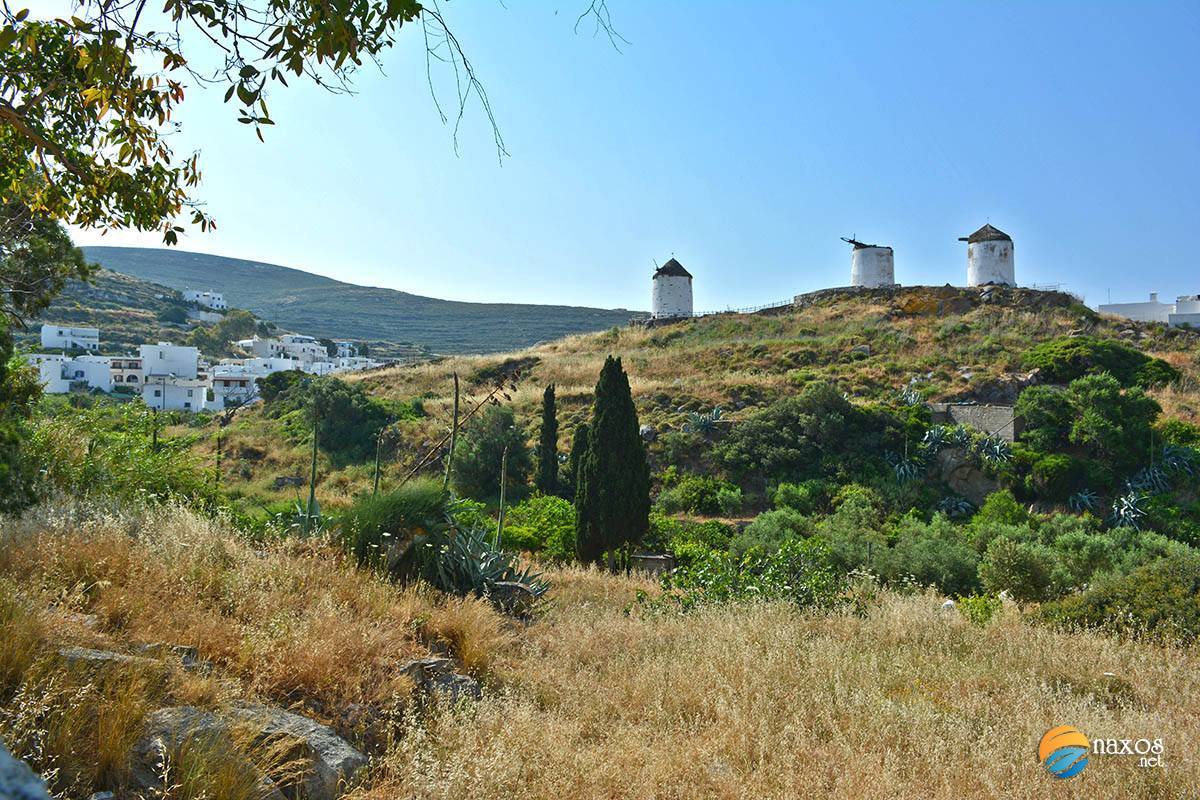 Tripodes also known as Vivlos is one of the largest and most picturesque villages in southwestern Naxos with its characteristic windmills. It is on the road to the south-west beaches of the island, about 8km from Chora and very near the famous beach of Plaka. Its paved streets are very narrow, lined with whitewashed houses radiating an authentic Cycladic ambience. Despite its double name, all village signs refer to the village only as Vivlos. The village has more than 800 permanent residents and is one of Naxos’s most lively villages.

The fear of pirates that ploughed the Aegean Sea forced the inhabitants to move their settlement inland for security. These migrations seemed to be random for several villages in those times and for Vivlos, the present location was determined during Frankish rule in the Middle Ages. The settlement is said to have been at Kechries in the past where there are the ruins of the tower of Ga. This was apparently the summer resort of Ioannis Ga, a noted citizen of Naxos. A little further to the west are the remains of the tower of Ai Giorgis (Agios Georgios – St. George), which is built on a precipice. The ruins of Plaka Tower and the chapel of Agios Mattheos, which is built on the ruins of an ancient temple (a common Christian practice), have led to speculation that at one time the settlement was originally built on the seaside area of Plaka.

The list of sights to visit in and around the village includes the church of Panagia Tripodiotissa which is the village’s patron saint, a number of traditional windmills which are in need of repair. A registered landmark at the entrance to the village which is near to the road leading from Tripodes to Plaka, the Plaka Tower known locally as Paleopyrgos (Greek – Old tower) or also known as Ariadne’s Tower and finally, the Folklore Museum, which is housed in a restored olive mill.

Nearby the village one can admire the wonderful Temple of Theotokou and its beautiful and very valuable hand drawn icons. The village is known for its numerous small churches, around 40 of them, strewn over its beautiful surrounding countryside, its historical background and its archaeological monuments and the friendliness and warm hospitality of its inhabitants.

The best view and picture one can take of the village is from the hill of St. Nektarios’ church, with the blue sea and the neighboring island of Paros acting as a background to the picturesque windmills on the opposite hill. Several other ruins of windmills are around the village.

Tripodes (Vivlos) has prospered thanks to the plain of Plaka which provides agricultural products of good quality. Among these are the nationally sought after Naxos potatoes, fruit, vegetables, grain. Vines are also cultivated which produce some very good wine.

Several kafeneia (traditional Greek café) are found around the square with the big eucalyptus trees offering shade and cool rustling in the breeze, while the abundant local production at the plain of Plaka ensures a wide array of good food and wines in the village tavernas. A big feast for Panagia (Virgin Mary) is held on August 23, the festivities attract people from all over the island.

There are parking areas in various sections within the village and during the high summer season you can take a bus from the KTEL terminal to Livadia and Tripodes, or Alyko, Kastraki, Mikri Vigla and Pyrgaki.