On steep slopes, with its traditional architecture and the finest of wines
Koronos village Photos & Videos Map 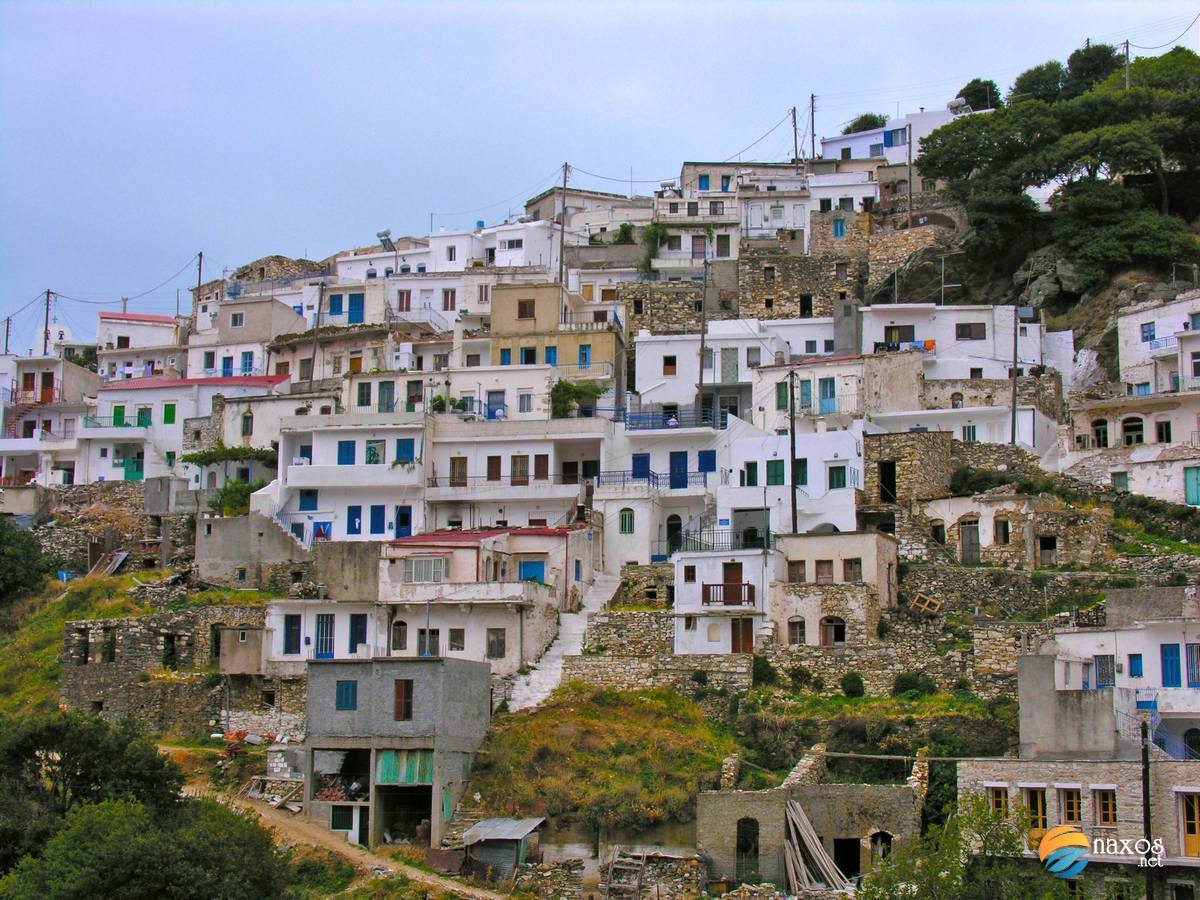 Koronos is one of the oldest settlements in northeastern Naxos which first appears in written records c.1200 AD. It is one of the 56 municipalities into which Marco Sanudo (1153-1227), the first Venetian Duke of the island, divided Naxos.

This is a quaint mountainous village is in a dramatic setting located approximately 28 kilometers north-east of Naxos Town (Chora - Hora). It is set on the slopes of a ravine with two distinct halves that face each other between Mt. Amomaxis and Mt. Koronos, straddling an enchanting green valley location full of vineyards some 540m above sea level.

The great surprise is not only its magnificent view but also the whitewashed courtyards and beautiful houses that have retained the traditional island architecture, sporting wooden balconies and first-rate tavernas. Innumerable flights of stairs and picturesque alleyways connect the seven neighborhoods. Namely those of Anegyrida, Kastro (Castle), Livadaki (Little field), Kato Gitonia (Lower neighborhood), Pano Gitonia (Upper neighborhood), Platsa (Square) and Provolakia. Picturesque “kafenia” (Traditional Greek cafe) under shadowy plane and poplar trees composing the scenery of this beautiful village, take you back in time. Almost all the aforementioned neighborhoods have their own square and old water fountain. The locals call the central square “Platsa”.

Apart from the coffee shops and taverns, the tourism infrastructure includes rooms to let, an eco-museum (where many events are held), a Folklore Museum – housed in a traditional guesthouse and traditional handmade product workshops.

Before World War II, the village prospered considerably thanks to the emery mining industry. Its population then numbered about 3,000. During the German occupation, the mines were forcibly shut down and a main source of income dried up, leading to death by starvation of 414 people.

On one slope you will see the vineyards which provide excellent quality wine. The vineyards are divided by dry stone walls. The village also produces fine agricultural products. Nearby Koronos stands the Church of Panagia Agrokiliotissa found by turning right about 500 meters before the village. The churches feast is a notable event celebrated on Friday after the Easter Sunday. It is a religious festival, with folk music, folk dances, food and wine. The center of the village is also home to a large church. Pan, the helper of Dionysus, was worshiped at the nearby cave where clay statues of this deity have been excavated.

Koronos has three parking lots, a regular bus service and is accessed via the island’s main road network passing through the villages of Apollonas, Apiranthos or Kinidaros. The villages nearest to Koronos are Skado and Keramoti.