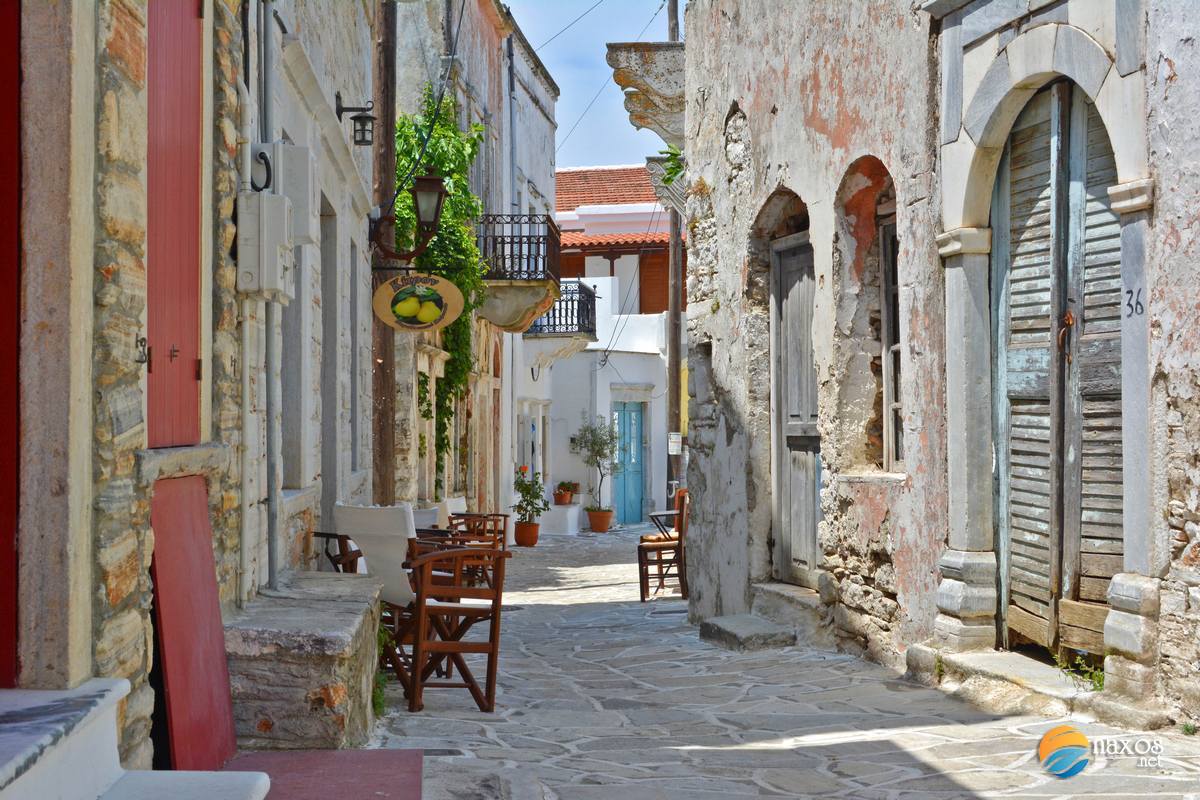 Halki (Chalki) village used to be the capital of the island as well as its main administrative and trade centre. It is located in the centre of Naxos, 16 km from Hora, or Naxos Town in the central area of the valley of Tragea and is now the administrative centre of the municipality of Drimalia. The region of Tragea is the principal olive cultivation area of the Cyclades. It is speculated that Halki’s name is derived from a family of bronze smiths who were settled in the region by the Venetians (Greek - Chalkos = Bronze).

Halki has a long history and the numerous neoclassical houses and buildings are testimony to the wealth and power the village once exerted in the surrounding area. Apart from the lovely old mansions and the picturesque churches, the village itself has colorful alleys that give visitors the sense that they have somehow gone back in time. Many well preserved houses, Venetian Towers and fine Byzantine churches can be found in the area. One of these is amongst Naxos’ oldest churches, the Church of Panagia (the Virgin), dating from the 9th century with some beautiful Byzantine and post-Byzantine frescoes.

In terms of archaeological interest, Halki is time and again described as the “Mystras of the Aegean”, reminiscent of the medieval Byzantine citadel in the South-Eastern Peloponnese. The broader area of the immense olive grove surrounding the village is dotted by important Byzantine churches with rare frescoes, inscriptions and sculptures. The most prominent of these are Agii Apostoli at Metochi, Agios Georgios Diassoritis, Agios Ioannis at Kerami, Panagia Damiotissa and Panagia Drossiani.

Other noteworthy sights include the church of Panagia Protothroni, which has been in uninterrupted service since 1052 and the imposing, 17th century Barozzi Tower.

It is a very fertile area of Naxos and in conjunction with the olive groves that cover many square kilometers, the “Citron” tree from which the famous Naxian liqueur is produced, is everywhere to be seen.

The mansion of the Vallindra Kitron distillery is at the heart of the village and can be entered gratis. You are given a tour of the site where the Kitron liqueur made from Citron leaves is produced. The tour provides plenty of interesting facts and you can see the workings of the distillery. Naturally the tour ends with a delicious sampling of the product as well as the brand of Ouzo which is also distilled on the premises. In recent years new facilities have improved the buildings attractiveness for visitors. These include an art gallery, an excellent restaurant and at the square, a snack bar-café for a quick bite to eat.