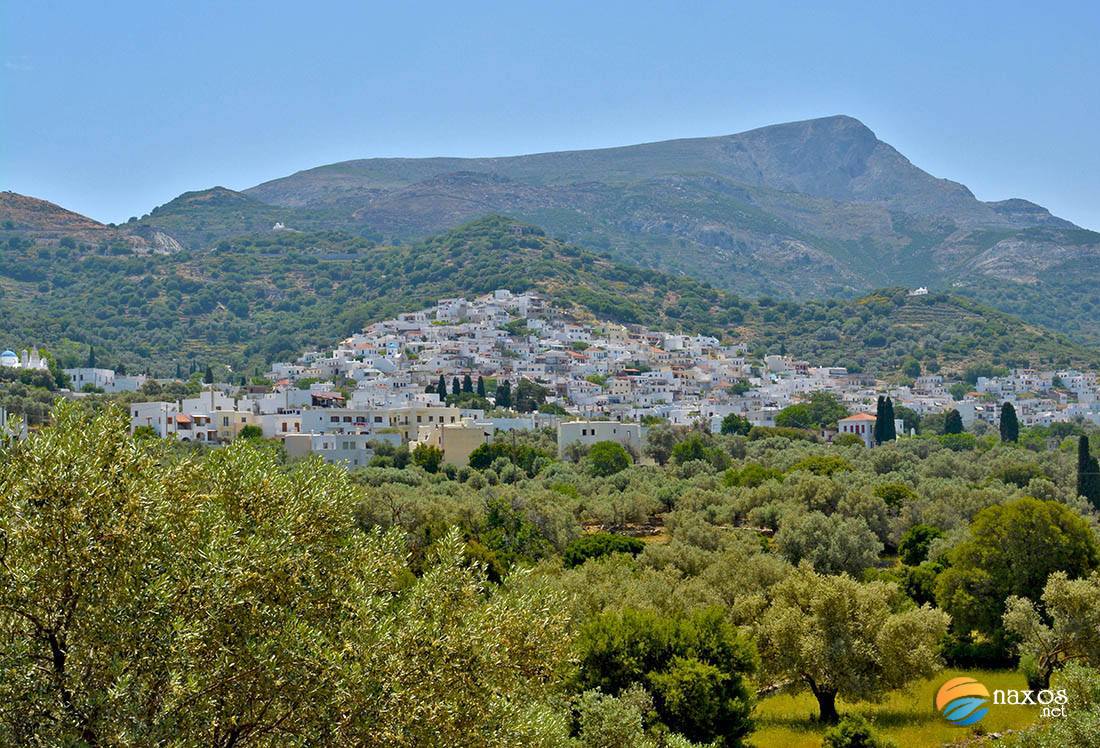 One of the most famous and beautiful villages of the island is Filoti in the Tragea region, which is well-known for its olive groves and little Byzantine churches, both of which are also found in the village. Filoti’s name is ancient and believed to be of Ionian origin.

Even though today it is one village, it is in fact comprised of three smaller settlements Liiri, Klefaro and Rachidi. The population totals about 1,800 which make it the largest village in numbers on Naxos and the Cyclades in general. The village is situated 18km from the capital of Naxos. It is a traditional Cycladic village built amphitheatrically on the slopes of mount Zas, with whitewashed, flat roofed houses and narrow heavily flowered streets. The inhabitants use their roofs as balconies or terraces for the warm summer months. The main street is the centre of village life in terms of café and restaurants. The little paved square named Gefyra (Greek - bridge), is surrounded by picturesque “kafenia” (Greek traditional cafes) also serving ouzo and snacks and a number of taverns and retail outlets, all shadowed by a huge, majestic plane tree allowing for a cool breeze.

Left of the square, the stone-paved road leads to one of the village’s two neighborhoods Liiri and Klefaro. The church Panagia (Virgin Mary) Filotitissa is located here. Standing tall, a little further down the road, the Barozzi Tower is a striking remnant of the island’s lengthy period of Venetian rule. Next to the tower, a marble wall with an inset marble tap has constantly running spring water and is accompanied by an inscription dating back to King Otto (Greek - Othon), who reigned from 1832 to 1862. He was and was the first king imposed on modern age Greece (Post Hellenic Revolution) and was of Bavarian descent. Rachidi, the village’s other main neighborhood, is on the uphill route south of the tower.

Filoti gathers many tourists each year. The main attractions are of course the breathtaking amphitheatric view of the mountains, the relaxing climate and surroundings and the opportunity to stroll through the village’s picturesque alleys. The surrounding impressive summits have two openings, one toward Tragea in the west, the other toward the local livestock farms in the south.

Cultural venues and sights are on both sides of the road. These include the ancient-styled sports stadium and adjoining entertainment theater, the war-heroes’ cenotaph and the Filoti Cultural Association Center housing a library, cinema and a reading club. If perchance the doors are open, Filoti has outstanding old churches and they are all worth exploring for their frescoes. Other worthwhile village sights include the well organized Greek Numismatic Collection Museum of Nikolas Moustakis, housed in an older well maintained building.

Interesting sights in Filoti’s surrounding area include the fountain of Arion, on Zas mountain’s slope, the Zas cave where Zeus was born according to mythology, Chimarros tower on the road to Kalandos, as well as numerous Byzantine chapels with original frescoes.

The people here certainly enjoy their popular traditions, including the ancient customs of Chirosfagia, Klydonas and Plitheri and all of them remain very much alive at Filoti. The village also hosts the island’s biggest traditional feast, a three-day event starting August 15, with dancing to the sounds of local violins coinciding with the Church of Panagia Filotitissa honoring the Assumption of the Virgin.

Roughly 60,000 sheep are reared in this area so the village is well-known for the excellent quality of its livestock products, such as lamb and goat’s meat and a wide variety of cheese products (anthotyro, arseniko, kefalotyri, myzithra and xinotyro), while a cooperative of local women produce and sell homemade sweet preserves (Greek - Glyka koutaliou).

The village is of course connected to the island’s main road network. Parking space is available and public transportation runs on a regular basis.