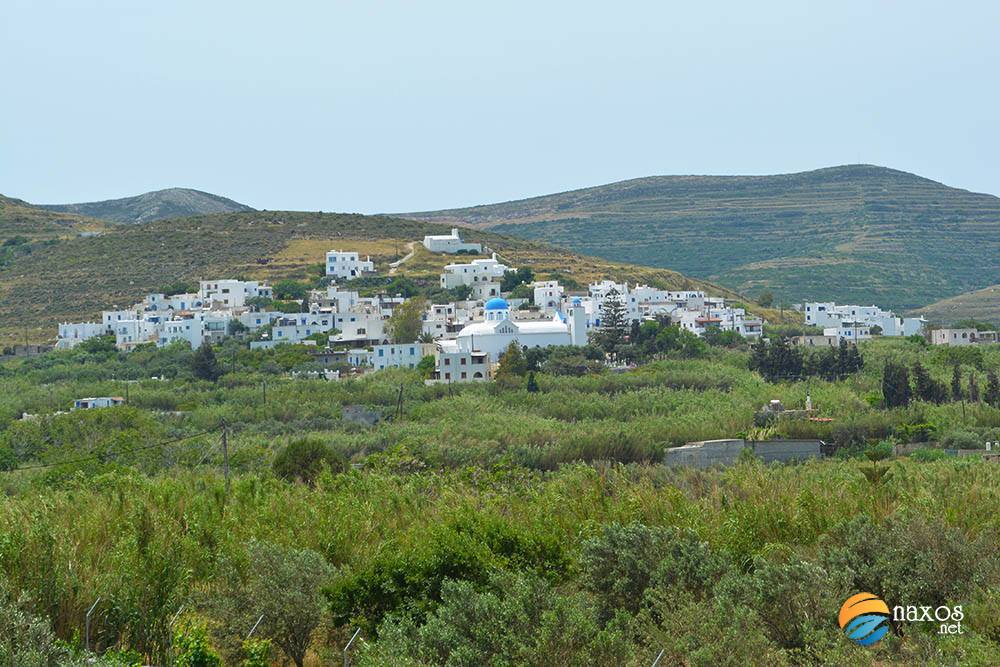 Eggares (or Egares) is a small farming village in the midst of a fertile plain just a few kilometers north of Hora (Chora – Naxos town). Most of its 200 permanent residents are farmers. The Eggares plain, accounts for a sizeable part of Naxos’s agricultural production due to its plentiful waters.

This is a small village with some picturesque churches and two restored olive presses one of which was built in 1885; today it houses the municipal office and the village clinic. The second structure is said to be some decades older, although the olive press itself is dated 1884.

During his teens at the end of the 19th century, prominent writer Nikos Kazantzakis spent time at the village which seems to have left him with memorable impressions.

In the summer the population swells nearly five-fold as people who are connected to the village and tourists make their way to it. The centre of the village is its attractive, stone-built main square. The village’s main Church, that of Kimissis Theotokou (Dormition of the Virgin), is to one side of the square. A second church on the hill above the village has two facades balanced with two separate bell towers. A little lower, there is an almost cathedral like church with a red dome which contrasts starkly with the tiny Cycladic style church standing before it.

Two streams traverse the village where along the banks there are two uninhabited neighborhoods, the one is Lagada, which features seven landmark watermills and the other Mesa Gitonia (Mid neighborhood), where the Foufopoulos tower is to be found. Both are pre-industrial revolution structures and were in operation until the 1960’s.

Just beyond Mesa Gitonia you can see the now ruined church of Panagia Monastiriotissa (Greek - Virgin of the Monastery), where the remains of some frescoes are visible. The structure was most likely built on the foundations of an ancient temple in the 9th century (a common Christian practice).

A short distance outside Eggares is a twin-arched, elegant marble bridge which is dated 1899. Before domestic water supply became available, the housewives of Eggares would bring their clothes to the stream to wash them. Here they would light a fire to heat water in the shade of the bridge.

East of the village is the hill of the Nativity, where a small chapel is built into the rock, this is where a sanctuary dedicated to the Nymphs existed in antiquity. The location offers superb views of the surrounding countryside.

The tavernas of Eggares serve excellent traditional dishes, all prepared with fresh local produce which is in abundance from the fields around the village.

The biggest feast in Eggares takes place on August 15, when the main church at the central square celebrates. It is held in the courtyard of the primary school, with local delicacies and wine, live music and dancing on offer.

Eggares lies 6km from Chora, on the western road axis to Apollonas. The nearest village to Eggares is Galini village. It also has a road connection with Kynidaros and a marked foot trail will take you to Keramoti. The village has ample parking space and there are frequent bus connections with Chora (Naxos town).