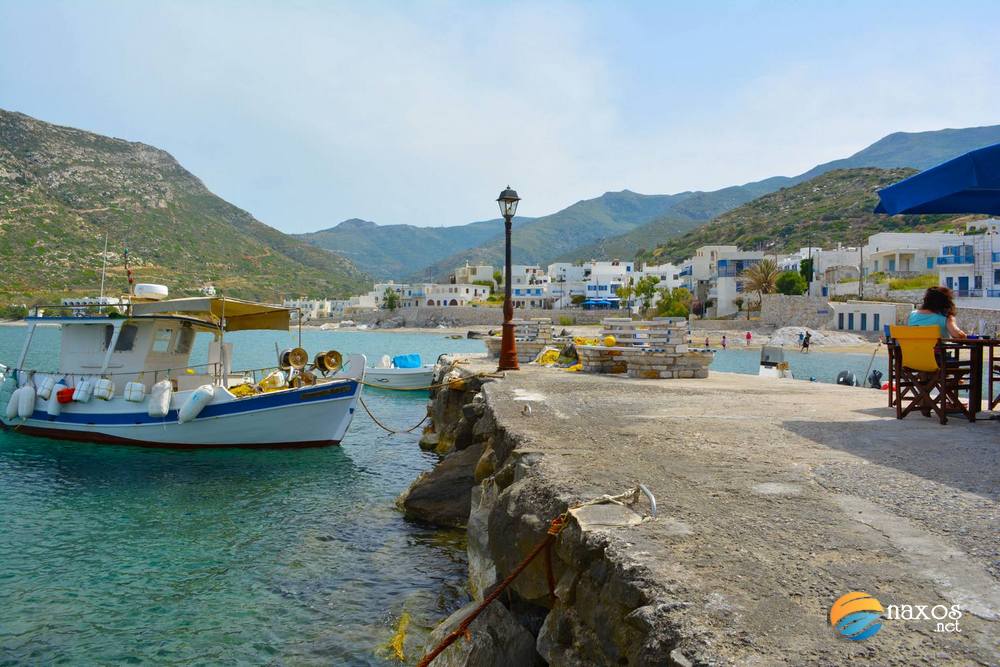 Apollonas village is a settlement on Naxos’s northeastern coast about 36km from the island's capital (Chora - Hora). It is a beautiful fishing village which has been inhabited since antiquity, probably on account of the marble quarry. In the old days, it used to serve as the port of the village Koronida (Komiaki). It was also the port from which Naxian marble was exported throughout its operation. Remnants of the ancient port have been found at Marmara.

Today, Apollonas is the most developed settlement of northern Naxos in terms of tourism. Picturesque whitewashed houses are smeared behind an attractive small sandy beach which stretches on into a larger beach strewn with white egg-like pebbles offering a palette of gold, white and the blue expanse of the sea. All characteristically Greek colours. The beach is lined with taverns, tourist shops and a mini-market, there are also rooms to let, hotels, tavernas and cafes. It is an ideal for relaxing breaks and can be used as a base for exploring the surrounding area with its unique sights.

The unfinished 10.5 meter statue of Kouros can be seen just a few meters outside the entrance to the village. The statue dates back to the 6th century BC and archaeologists believe it represents the god Dionysus. By following the signs direction to the top of the village you will see another unfinished 7 meter Kouros statue still lying there (others have been stolen). It is said that these statues were left on Naxos Island because of accidents that occurred during their sculpting. Naxos’ Marbles were used in the construction of the Acropolis and the manufacturing of statues. Another sight in the area, towering on a hilltop above the inlet, lay the ruins of the prehistoric fort atop of Kalogeros.

Agios Ioannis (St. John) is the patron saint of the settlement and he is celebrated on August 29th. Vespers on the eve of the celebrations are followed by a litany procession of the icon of St. John and a traditional feast in the local tavernas. On June 28th the village holds the annual Fisherman’s Feast, when the blessing of the waters and boats takes place and is then followed by feasting.

Asphalt road in good condition leads directly to the village. It is a lovely drive to Apollonas as the road snakes the entire north-west coast offering magnificent views.

Apollonas is accessible via the main western road from Chora to Eggares. Alternatively, it can be accessed via the central main road to Stavros in Keramoti. A parking area is available and the public bus service is operated with several connections daily, especially during the summer season.