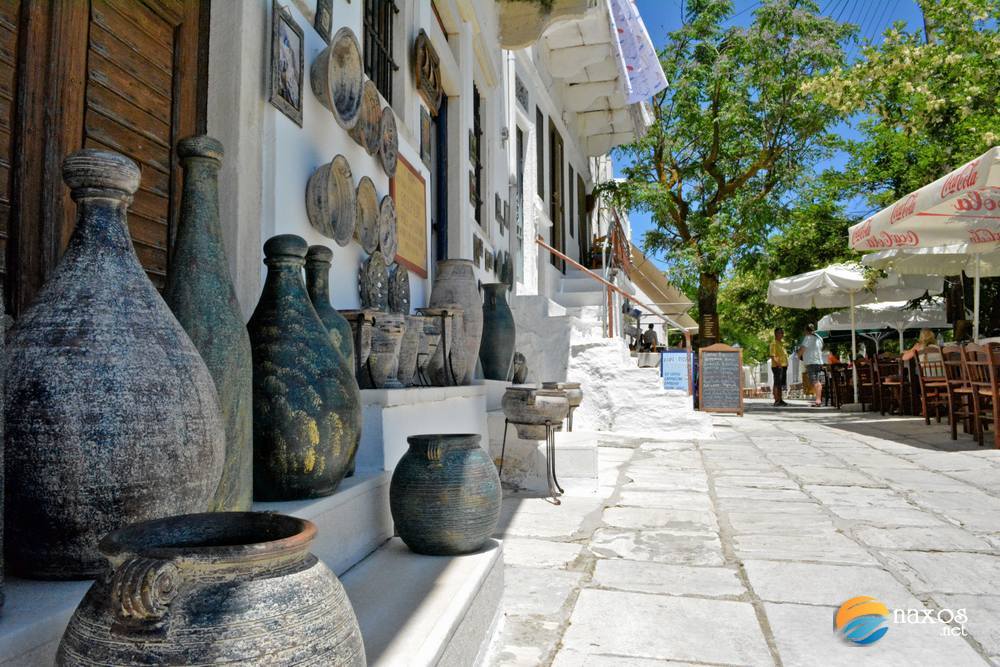 Apeiranthos village is by many considered the crown jewel of Naxos. Much of this belief is due to the fact that over the centuries it has managed to retain its unique authenticity which is apparent in every step you take, in every alley you walk and wherever you look. This is so not just because of the village and its uniqueness on the landscape of Naxos, but also for its nearly 1100 proud inhabitants who have kept their own distinct dialect where even a slightly trained ear reveals their true Cretan origin.

Amphitheatrically built at the slopes of Mount Fanari, it boasts magnificent views of the Naxian mountain ranges. As the locals say, while at Apeiranthos, there is no way of telling that you are, in fact, on an island. The feeling one gets is more that of a northern mainland Greece village than that of a Cycladic Island. This is partly due to its architecture and stone built houses but mainly due to its altitude, the centre of the village is located at approximately 600m from sea level.

The altitude offers extraordinary views from its various restaurants serving the local produce and the café most of which overlook the surrounding peaks and valleys.

This is no ordinary village, far from it; it is uniquely expressed in its awareness of history from several angles. At Apeiranthos you will find not one or two but 5 museums:
the Apeiranthos Archaeological Museum
the Geological Museum
the Museum of Natural History
the Visual Arts Museum and
the Folklore Museum
all worth visiting.

But its most impressive feature is its architecture. Stone built towers, old houses and churches, marble paved alleys, traditional small souvenir and local craftsmanship shops. It is a photographer’s paradise in all its glory…

The women of Apeiranthos show and sell their wonderful embroideries to anyone who can appreciate the work effort and pride that is apparent in every stitch. These are managed and sold via the Woven Products Cooperative they created some time ago. At the entrance to the village one can’t miss the big Tower of Zevgolis, now privately owned and in excellent condition.

From Naxos Town, the shortest route to get to Apeiranthos is via the villages Galanado, Damalas, Damarionas and Filoti and it is 25km long. However, the most commonly used route is from Galanado to Halki and Filoti (see the map for more accurate instructions) which will add only one more kilometer but offers easier access. Low speed is advised in both cases not only for security issues but also to get a good glimpse of the beauty of the countryside of Naxos as you drive ever upwards to get to its jewel.