The Greek Orthodox Easter is the single most important religious period of the year. It culminates with the resurrection and a meal that ends 40 days of fasting meat and animal products and derivatives thereof such as cheese a.s.o., on that last night at the church gathering for the resurrection, the Greeks “celebrate with a bang!” both under the counter firecrackers and similar homemade explosives raise a cacophony that is supposed to scare away evil and almost literally raises the dead! 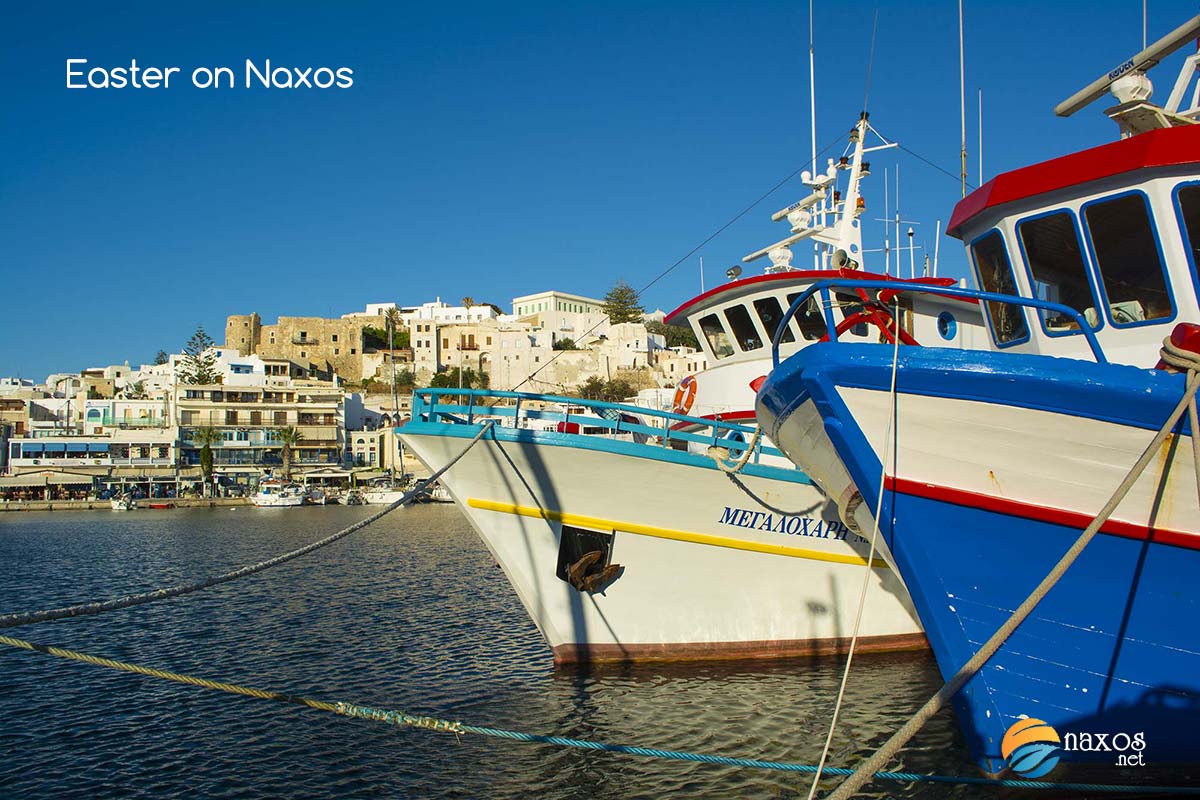 On Naxos, local village customs can differ slightly. For instance at midday, on Holy Friday, at the church of Panagia Drossiani (the Virgin of Drossiani), the village women hand out to parishioners a special raisin-walnut bread made specifically for Lent. On the Saturday of the eve of Easter, the Greek family concentrates on, baking and cooking for the dinner after the resurrection and the meal the following day.

In Koronos, festivities start from Good Thursday. Many Naxians arrive at Koronos on foot from various parts of the island and gather to the monastery of Panagia Argokiliotissa where they stay up all night attending mass. On the morning of Good Friday, many more people arrive and the icon of Panagia (the Virgin Mary) is transferred to the area where it was found, which is now a place of holy pilgrimage for all the people of Naxos.

One of the characteristics of Naxos Island as a destination for Easter holidays is its numerous, quite well-populated villages found across the island, even on its mountains. Most of these villages have a quaint old world charm about them on the surface, but have adopted several elements of modern lifestyle while maintaining their identity intact. A visit to any one of them leaves no one in doubt that they are steadfast in keeping their rich traditions and customs alive to hand on to the next generation. This is especially true of the traditions and especially religious holidays, such as the Greek Orthodox Easter.

On Naxos, just like the rest of Greece, Easter precedes the beginning of spring. During this period, many city dwelling Greeks who have family or property at their ancestral villages, travel to their mountain and seaside villages to celebrate their religious and local cultural traditions associated with the spring break. These include attending a series of masses, often partaking in the procession of the Epitaph on Holy Friday and the always popular cracking of dyed red eggs on the eve of Easter Sunday when breaking their fast after 12pm.

The traditional meal of Easter Sunday is the highlight of the Easter gastronomic celebrations where most of Greece, with the exception of very local traditions, roasts a lamb on the spit over a hot bed of charcoals. Some of the villages of Naxos have additional unique customs and recipes that are associated with the Easter holiday. A good example is the delicious Batoudo of Komiaki, the stuffed young goat with rice and aromatic herbs, which you may also enjoy at Apeiranthos and Filoti with the addition of raisins and small pieces of liver respectively.

For those of you who decide to spend their Greek Easter holiday on Naxos, you must be aware that ferry tickets are usually pre-booked well in advance and thus have very limited availability, if any, especially from Good Friday till the Tuesday after Easter. There is also limited availability in accommodation since most Naxos hotels and rooms are usually closed during this period and only a few operate.